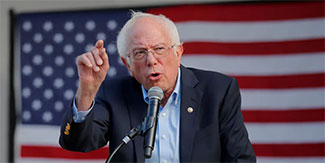 Senator Bernie Sanders biggest problem is his age. The mainstream media totally ignores this issue. Our last two presidents have been young. The job is exhausting. Presidents do not get a lot of sleep.

The next problem that Sanders has is that he is a socialist.   America was not built on socialism or for that matter ideology. America was built on practicality and capitalism.   Sanders does not like the stock market or big business. There are clearly things that need to be done to improve the stock market activities of large investors.

The biggest problem with the stock market is an uneducated naïve public. A large portion of the population does not understand how to invest in stocks. The solution to this problem is education. Start teaching investing in stocks in the 5th grade. Also, at the same age, start teaching money, banking, and how credit and credit cards work.

Sanders may not like big business or the stock market but he can’t ignore them. Big business and the stock market provide thousands of jobs. CEO’s make extraordinary salaries.   No chief executives is worth more than about $5,000,000 a year.   Anything over and above is made with the assistance of a sometimes very huge staff. Some executives have compensation packages exceeding $100,000,000. That needs to be curtailed.

If you want to really help college students—every political party should support this—cut the interest rate on student loans to 2%.

There are too many kids going to college, we need more trade schools. Everybody does not have to be a college graduate.

I would like to know a lot more about Bernie Sanders and the other candidates. What countries have they travelled to? Do they speak any foreign languages?

Have their travels been strictly for official business or have they travelled to foreign countries for personal reasons (pleasure, vacation, visit relatives etc) ?

In the passed 20 years or so of Senator Sanders political career what legislation has he introduced and gotten made into law. What has he done and why didn’t we hear about him until he decided to be a Presidential Candidate?

I do not think that Senator Bernie sanders could handle the Presidency. He clearly has some interesting ideas but really has no plan. He gives the impression that he is unwilling to compromise, a serious flaw for a president. He should step aside.

(A little bit about me:   I am about four months older than Bernie Sanders.

I swim a half mile a day between 150 and 200 days per year. I started out managing family owned residential real estate. In 1976, I started a community newspaper in White Plains, NY which I published until 1995. I’ve been married for more than 40 years(only once). I have four grown children and five grand children. I do not want to be President, I do not think I could handle the stress or the lack of sleep and I am too old.